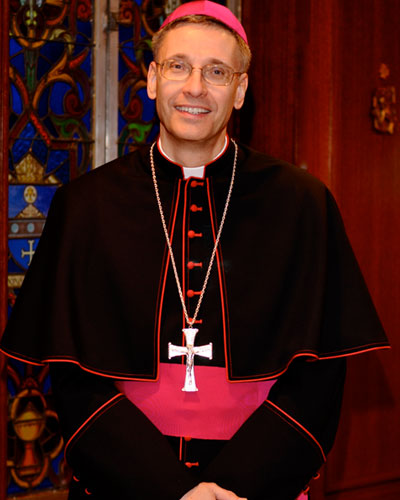 The Most Rev. Mark Leonard Bartchak was ordained a Bishop and installed as the eighth Bishop of the Diocese of Altoona-Johnstown on April 19, 2011, at the Cathedral of the Blessed Sacrament in Altoona.

He attended Catholic elementary and secondary schools, graduating in 1973 from Bradford Central Christian High School, Bradford, Pennsylvania, in the Diocese of Erie. His college studies were at St. Mark Seminary and Gannon University, Erie, PA, where he received a Bachelor of Arts degree in Philosophy in 1977. He also studied for the priesthood at Christ the King Seminary, East Aurora, NY, receiving a Master of Arts degree in Theology in 1981. He studied canon law at The Catholic University of America in Washington, DC where he received the Licentiate degree in 1989 and the Doctorate degree in 1992.

Bishop Bartchak was ordained a deacon at Christ the King Seminary on September 22, 1980, and served as deacon at St. Joseph Parish, Warren, Pennsylvania. He was ordained a priest for the Diocese of Erie on May 15, 1981, by the late Bishop Michael J. Murphy at St. Peter Cathedral, Erie. In 2000 he received papal honors from Pope John Paul II with the title of Chaplain to His Holiness.

In 1982 Bishop Bartchak was appointed part-time Defender of the Bond, and in 1986 he was assigned full-time to the Tribunal of the Diocese of Erie. During his time in Washington, Bishop Bartchak assisted as a confessor at the Basilica of the National Shrine of the Immaculate Conception and at the U.S. Naval Academy in Annapolis, Maryland.

Bishop Bartchak is a member of the Canon Law Society of America (CLSA) and the Mexican Association of Canonists. He has served on several CLSA committees. In 1999 he was elected to serve on the CLSA Board of Governors and later he was elected to serve as Vice-President (2002-2003) and President (2003-2004) of the Canon Law Society of America. During his term as President, Bishop Bartchak represented the CLSA at private meetings at the Vatican with officials of various Congregations, Councils, and Tribunals of the Apostolic See.